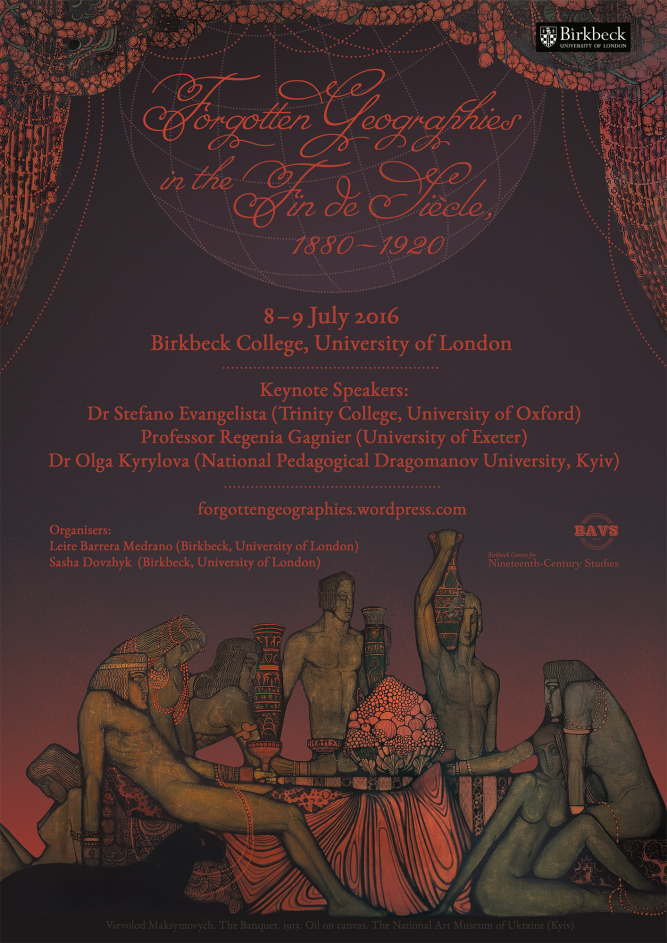 The glamour and mystery of the place, with its sinister atmosphere of forgotten nations,
appealed to the imagination of my friend.

― Arthur Conan Doyle, The Adventure of the Devil’s Foot

Recent years have seen an upsurge of interest in fin-de-siècle cultural studies and, in particular, in the growth of cosmopolitanism and internationalism in Europe during the 1880s and 1890s. This critical reception has tended to read British fin-de-siècle culture as a reflection of and reaction to specific European countries, mainly France. The wealth and variety of imperial and industrial Britain’s cross-cultural exchanges, however, has not been generally considered as a whole. British artists and writers of the 1880s and 1890s were avid travellers and readers who came in contact with a vast range of European cultures – Belgian, Bohemian, Greek, Norwegian, Russian, Spanish… As a way of escaping industrialisation and cultural homogenisation, or as a consequence of imperial politics, many artists and writers also interacted with further cultures, such as Chinese, Egyptian, Indian, Moroccan, and Turkish, to name but a few. British authors of the fin de siècle were undeniably influenced by French writing, but also by Scandinavian naturalists like Ibsen and Hamsun, and by the newly translated fiction of Turgenev and Tolstoy.

Likewise, the impact and response to British art and literature in the international cultural community has yet to be explored. Anglomania was a distinct tendency among aesthetes in turn-of-the-century Hungary, Russia, Austria, Ukraine, and Poland, to name but a few. The promotion of British aestheticism was often seen by the locals as a step to modernisation and advancement of national artistic and literary tradition. English magazines, which facilitated revolutionary changes in publishing, design, and international networking, e.g. The Studio, The Yellow Book, The Savoy, were set as examples for the emerging culture of periodicals in Eastern Europe. The late Pre-Raphaelite movement, especially works and ideas of Burne-Jones and Watts, was also a powerful yet underappreciated influence on the development of Symbolism in Polish visual culture.

As recent research questions the cultural segregation between East and West, challenging post-colonial assumptions about imperial hierarchy, and instead emphasising global networks of reciprocity, it is the intention of this conference to further expand this debate. By bringing together established and emerging scholars, we aim to reconsider the intellectual and national foundations of the British fin de siècle, assessing the role of other ‘forgotten’ cultures in the articulation of British cultural movements of the time. At the same time, we intend to unlock and reframe the perception of British authors abroad by explicating the reinvention of meaning of their work in different cultural, social, and political environments.

The conference is supported by the British Association for Victorian Studies (BAVS) www.bavsuk.org and the Birkbeck Centre for Nineteenth-Century Studies.