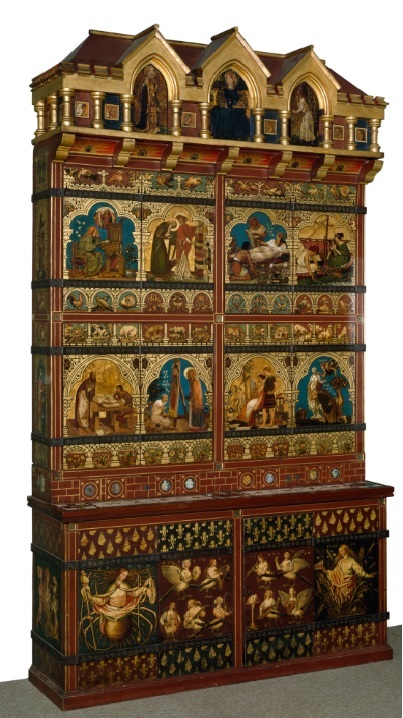 ‘Red brick lip’: Morris, Burges and the poetry of architecture

This paper was presented at the Forum for Nineteenth-Century Studies on Thursday 2 March 2017 in the Keynes Library, Birkbeck School of Arts, by Charlotte Ribeyrol (Sorbonne; Trinity College, Oxford). The paper was followed by a response from Matthew Winterbottom (Ashmolean Museum).

Abstract: This paper focuses on the chromatic anachronism of William Burges’s Great Bookcase (1859-62, Ashmolean Museum, Oxford) which was first exhibited in the Medieval Court of the 1862 International Exhibition. Modelled on a surviving piece of polychrome French Gothic furniture, and painted by no fewer than 14 promising artists (including Edward Burne-Jones and Simeon Solomon), it represents the Pagan and Christian origins of art and yet some of the colours used were modern pigments devised by an expanding chemical industry. A fellow exhibitor of painted furniture at the Medieval Court, William Morris shared a similar passion for medieval France, which his early poetry construed as a golden age, contrasting with the bleakness of the industrial present. However some of his poems also introduce effects of chromatic disjunction and anachronism, notably in ‘Golden Wings’, which H.H. Statham analysed in 1897 as ‘characteristic of a decorator poet’, quoting the expression ‘red brick lip’ as ‘a sign of the times’ rather than of the architecture of the age of Chrétien de Troyes. Drawing on the complex description and inscription of these shifting chromatic materialities, I wish to show how the convergence of Victorian debates on ancient forms of polychromy and the colours of industrial modernity shaped Morris’s and Burges’s early poetic and artistic practice.

Speaker: Charlotte Ribeyrol is Associate Professor at the Sorbonne University in Paris and a Member of the Institut Universitaire de France. A former student of the École Normale Supérieure, her main field of research is the influence of Ancient Greece on Victorian painting and literature. She is the author of « Étrangeté, passion, couleur », L’hellénisme de Swinburne, Pater et Symonds (1865-1880) (Grenoble: ELLUG, 2013), as well as the editor of several volumes, including The Colours of the Past in Victorian England (Oxford: Peter Lang, 2016); Antique bodies in Nineteenth Century British Literature and Culture (with C. Bertonèche) Miranda, n°11, 2015; Late Victorian Paganism (with C. Murray) Cahiers Victoriens et Edouardiens, 2015; and Inventer la peinture grecque antique (with S. Alexandre and N. Philippe) (Lyon: ENS-Éditions, 2012). She is currently preparing a monograph on the colours of William Burges’s Great Bookcase at Trinity College, Oxford, where she holds a two-year Marie Curie Fellowship (2016-2018).

Listen to a recording of Charlotte Ribeyrol’s paper ‘”Red brick lip”: Morris, Burges and the poetry of architecture’ here:

Morris, Burges and the Poetry of Architecture

Listen to a recording of  Matthew Winterbottom’s response here:

Morris, Burges and the Poetry of Architecture: response

sitemanagerAudio recordings for ‘Morris, Burges and the Poetry of Architecture’02.06.2017