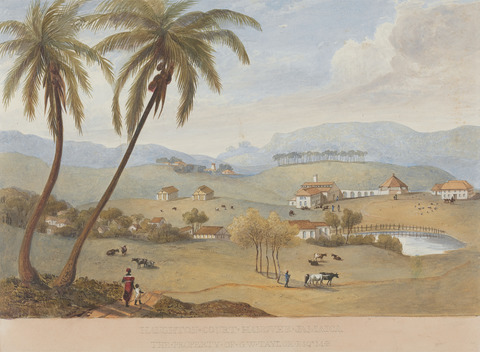 This multidisciplinary collection will examine the creation and circulation of colonial visual cultures from the Caribbean during the eighteenth and nineteenth centuries. The era of Caribbean slavery placed the islands at the centre of the production and movement of goods, ideas, money and peoples, as well as cultural conflicts, exchanges and hybridities which created new challenges for artists, and new ways of looking. As a cornerstone of European imperial expansion the Caribbean had an enormous imaginative influence on Europe and the wider world. Tropical vistas and diverse peoples provided new visual subjects, and the art of the Caribbean participated in the circum-Atlantic movement of aesthetics, ideas and images: from mid-eighteenth-century georgic scenes which attempted to reconcile beauty with enslaved labour, to the colonial picturesque of the 1790s which rearticulated metropolitan landscape visions, to the unique botanical and zoological images which emerged from natural histories and travel narratives, and latterly to the early photography which marketed the West Indies to potential tourists. Significantly, the collection will position African-Caribbean, maroon, and indigenous material cultures at the centre of its exploration of how Caribbean visual cultures were related to the ways of seeing associated with modernity.

This collection invites contributors from history of art, literature, anthropology, history and geography and other disciplines to focus their attention on the specific dynamics of Caribbean visual cultures. What ways of seeing emerge under the conditions of slavery? How were images and objects produced, circulated and consumed in the colonial context? What were the relationships between text and image in pre-disciplinary forms such as the travel narrative? How did visual cultures operate across the heterogeneous cultures and geographies of the Caribbean islands? What were the relationships between colonial and metropolitan aesthetic images and practices? By focusing on the Caribbean islands and the circum-Atlantic production of imagery which they engendered, the essays in this volume will open up alternate genealogies and geographies for Caribbean art and ideas about the visual that are central to the emergence of colonial modernity.

Successful essays will be included in a special issue of Atlantic Studies: Global Currents.

Deadline for full scripts will be 15 November 2017.