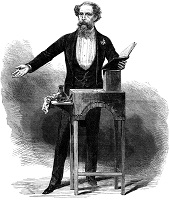 Dickens often associated his own works with a cheerful ideology of hearth and home. Writing to his friend John Forster on plans for a new periodical, he promised that it would have ‘a vein of glowing, hearty, generous, mirthful, beaming reference in everything to Home, and Fireside’. Yet, many of the families in Dickens’s fiction are far from mirthful. From Mrs Joe going on the rampage to the murderous Jonas Chuzzlewit, the Dickensian family is as conflict-ridden as it is cosy. And, for Dickens, family is a particularly flexible concept, ranging from the nuclear to the extended, encompassing elective families, diverse gender roles, child-carers and surrogate-parents. Dickens’s writing is frequently concerned also with those without families: orphans, singletons, and those alienated from others by choice or circumstance.

Dickens’s wider communities are equally eclectic. In prefaces and journalism, he makes appeals to his ‘community of readers’, a virtual community linked through his writings. He participated in other more tangible communities, as an author, journalist and actor in amateur dramatic performances. And he wrote of diverse forms of community: gangs, clubs, the parish, the nation, and religious, political and cultural societies.

Jointly run by Birkbeck, Cardiff University, the Dickens Fellowship and the Institute of English Studies, this one-day conference will explore all aspects of Dickens, Families and Communities. We invite proposals for 20-minute papers in response to the theme and warmly encourage Dickensians and scholars of all backgrounds and career stages to apply.

Topics could include but are not limited to: