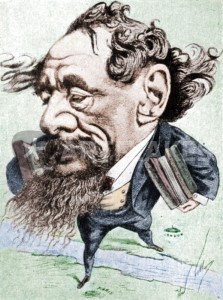 From stagecoaches to railways, sailing ships to steam ships, travel changed forever over the nineteenth century as new modes of transport enabled people to go faster and further than ever before. And Dickens wrote from the heart of this travelling revolution. When he visited America Dickens chose the fastest and most modern form of transatlantic transport – the paddle-steamer. He was keenly aware of the way ‘railway mania’ was changing the face of the country, and of the opportunities (and dangers) created by the new railways. But nostalgic depictions of stagecoach travel also run through much of his fiction.

Dickens’s trips to America, Italy, France and Switzerland are immortalised in his writing – as is Australia which he visited only in his imagination. And the exotic worlds of The Arabian Nights and The Tales of the Genii from his childhood reading are revisited again and again in his works.

This one-day conference will be celebrating the 25th anniversary of Dickens Day. Jointly run by Birkbeck, University of Leicester and the Dickens Fellowship, it will explore Dickens’s travels and travels in Dickens. The day will end with a celebratory reception complete with birthday cake!

sitemanagerDickens Day 2011: Republics of the Imagination: Dickens and Travel09.10.2014