Our members are engaged in a number of exciting research projects. We frequently publish our work in leading journals and monograph series in the field, and are committed to sharing our research with a number of diverse audiences through exhibitions, talks and workshops. Click on and expand the links below to see detail of our most recent research, including our publications and public engagement activities. More details on past research projects can be found by visiting members’ individual staff profiles.
Carolyn Burdett 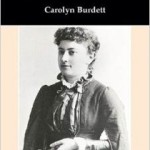 ‘Experimenting in the Galleries / Working with Vernon Lee’ at https://experimentingwithvernonlee.com/
Luisa Calè
Luisa Calè works on Romantic period literature and visual culture; the emergence of museums and exhibitions; the intersections between reading, collecting and the history of the book, and critical disciplinarity. She has published Henry Fuseli’s Milton Gallery: ‘Turning Readers into Spectators’ (2006), Dante on View: The Reception of Dante in the Visual and Performing Arts (2007, co-edited), Illustrations, Optics and Objects in Nineteenth-Century Literary and Visual Culture (2010, co-edited), a special issue of Eighteenth-Century Studies on ‘The Disorder of Things’ (2011, co-edited), and two issues of 19: Interdisciplinary Studies in the Long Nineteenth-Century. Her current book project, entitled ‘The Book Unbound’, explores practices of reading, collecting, and dismantling the book. She is also involved in experiments in durational and interval reading, which explore the potential of digital platforms and social media. She set up the Our Mutual Friend Reading Project, and worked with the MFA Theatre Directing at Birkbeck on an adaptation of William Blake’s The Four Zoas, which she describes in ‘Blake’s Dream: A Dramaturgical Experiment’. Current Projects: Monograph The Book Unbound (monograph on the material culture of books, ca. 1750-1850, with chapters on Walpole, Blake, and Dickens) Current Projects: Edited Collections Recently Published: Forthcoming Essays: In Progress: Conferences and Symposia Organized: Selected Talks:
Hilary Fraser 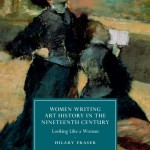 Publications  Women Writing Art History in the Nineteenth Century: Looking Like a Woman (Cambridge: Cambridge University Press, 2014) This book sets out to correct received accounts of the emergence of art history as a masculine field. It investigates the importance of female writers from Anna Jameson, Elizabeth Eastlake and George Eliot to Alice Meynell, Vernon Lee and Michael Field in developing a discourse of art notable for its complexity and cultural power, its increasing professionalism and reach, and its integration with other discourses of modernity. Proposing a more flexible and inclusive model of what constitutes art historical writing, including fiction, poetry and travel literature, this book offers a radically revisionist account of the genealogy of a discipline and a profession. It shows how women experienced forms of professional exclusion that, whilst detrimental to their careers, could be aesthetically formative; how working from the margins of established institutional structures gave women the freedom to be audaciously experimental in their writing about art in ways that resonate with modern readers. Forthcoming in 2015: Conferences and Lectures in 2015:
David McAllister 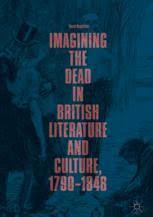 Research: My monograph, Imagining the Dead in British Literature and Culture, 1790-1848 (Palgrave, 2018), traced an alternate history of the cultural significance of the dead in early nineteenth century British culture, repositioning them at the centre of post-French Revolutionary and progressive debates about  political reform, education, urbanisation, psychology, and the uses of the past. Drawing on a wide range of Romantic and Victorian writers (including Wordsworth, Dickens, De Quincey, Godwin, and D’Israeli) this interdisciplinary study contributes to the burgeoning field of Death Studies by drawing on the work of both canonical and lesser-known writers, reformers, and educationalists to show how both literary representation of the dead, and the burial and display of their corpses in churchyards, dissecting-rooms, and garden cemeteries, responded to developments in literary aesthetics, psychology, ethics, and political philosophy. Imagining the Dead in British Literature and Culture, 1790-1848 shows that whether they were lauded as exemplars or loathed as tyrants, rendered absent by burial, or made uncannily present through exhumation and display, the dead were central to debates about the shape and structure of British society as it underwent some of the most radical transformations in its history. I have two new research projects which combine my interests in death and materiality with the fields of Ageing Studies and Victorian masculinities. The first of these is a consideration of Dickens’s representations of ageing, with a particular emphasis on the increasing visibility in his novels of ageing male bodies. I have essays on this topic forthcoming in the journal Age, Culture, Humanities, and I’m co-editing (with Jacob Jewusiak (Newcastle)) a special issue of 19: Interdisciplinary Studies in the Long Nineteenth Century on Victorian representations of ageing which is tentatively titled ‘The Old Nineteenth-Century’. I am also in the very earliest stages of thinking about the literary construction of widowerhood in Victorian poetry and prose.
Emily Senior

My monograph The Caribbean and the Medical Imagination was published by Cambridge University Press in 2018. The book is a study of how the medical ideas that underpinned discourses of race, landscape, and aesthetics were produced and circulated by colonial literary texts. The project speaks to current concerns in literary and cultural studies, the history of Atlantic knowledge, medical humanities, and postcolonial studies, focusing on the conceptual structures of imperial discourses and cultural practices, and on the relationship between literary form and medical and scientific ideas. My current projects include a literary history of medical and scientific anecdotal culture in the eighteenth and nineteenth centuries: ‘Anecdotal Evidence: Science and Storytelling’. I am also working on a project on Colonial Caribbean Visual Cultures with Dr Sarah Thomas (History of Art, Birkbeck). We co-organized a conference with Tate Britain which marked the opening of Tate’s major exhibition on art created under the conditions of the British Empire and its aftermath. We are now working on a forthcoming special issue for Atlantic Studies: Global Currents. Previous projects include ‘Aesthetic Enlightenments: Cultures of Natural Knowledge’, with Dr Sarah Eastery-Smith (University of St Andrews), which examines the relationship between the aesthetic production and social circulation of knowledge about the natural world in the long eighteenth century, focusing on the hybrid and plural forms through which knowledge was made, practiced, textualized, and viewed. We held a conference at the Huntington Library, California, in January 2014, and published a special issue of the Journal for Eighteenth-Century Studies. 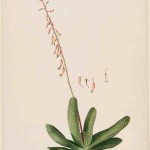