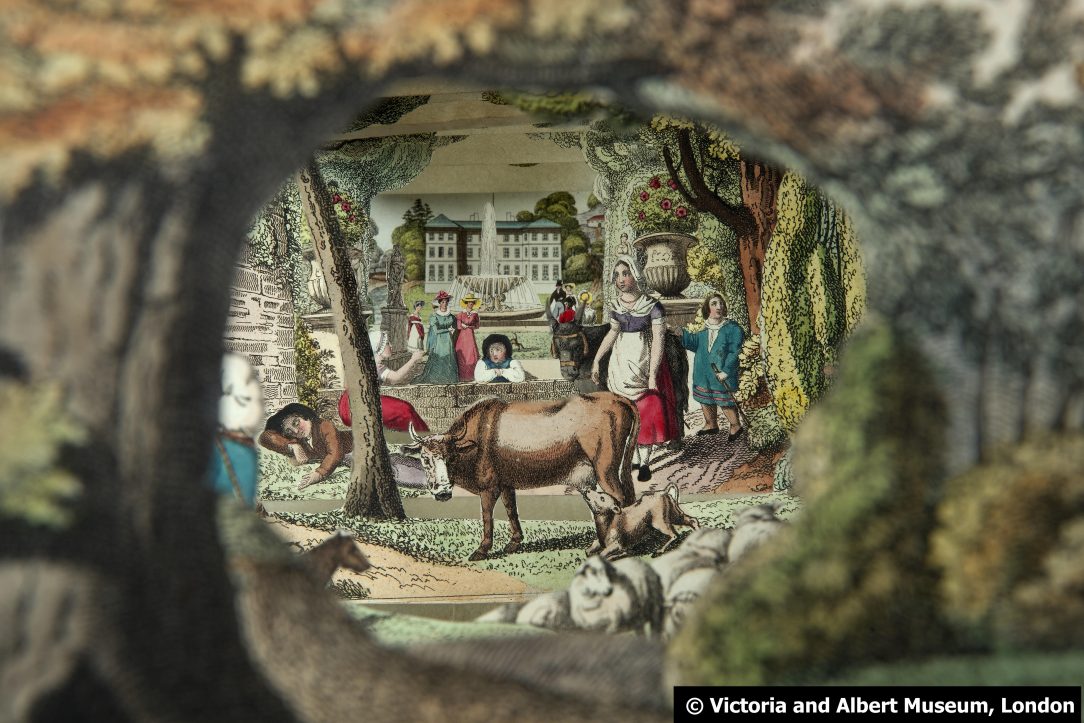 During Birkbeck Arts Week 2018, two paper peepshow-related events brought attention to this interesting but under-researched optical toy. Consisting of cut-out panels connected by paper or cloth bellows, the paper peepshow first appeared in Europe around 1825, and would usually depict historical events, distant places, or contemporary spectacles. In Britain, paper peepshows produced as souvenirs to the Thames Tunnel and Great Exhibition in 1851 enjoyed great popularity. Although the paper peepshow gradually became obscure during the second half of the nineteenth century, it has been revived in the twentieth century and is now a much-liked form of novelty book among book artists.

During my research on nineteenth-century English paper peepshows, I have been lucky enough to assist with cataloguing the Jacqueline and Jonathan Gestetner Paper Peepshow at the Victoria and Albert Museum (V&A). A preliminary literature review revealed that the paper peepshow has been interpreted as being part of print culture, as a forerunner of children’s novelty books, or as one of the numerous types of optical entertainment that flourished during the nineteenth century. On the other hand, I consider handling a source of inspiration for any theoretical analysis of the paper peepshow. Birkbeck Arts Week was the perfect opportunity to test these different aspects of paper peepshow research through a practical workshop and a panel discussion.

Paper Peepshow: Make Your Own

The workshop was led by Su Blackwell, a book sculpture artist who works predominantly with paper. Within a two-and-half hours workshop, each participant made a paper peepshow consisting of four cut-out panels and a background. Due to the time limit, the frames of the panels were pre-cut, and the images on them also pre-drawn. Participants would only need to prepare the connecting bellows on either side, cut out the images, and assemble all elements together. Nevertheless, the task proved much more difficult than expected. Problems ranged from an excessive amount of glue, mistakes in aligning various paper parts, and of course difficulties in cutting out all the delicate images within the short timeframe of the workshop.

Apart from the fun of making a paper peepshow ourselves, the workshop shed light on many interesting aspects of the production of nineteenth-century paper peepshows. During the making process we appreciated how delicate paper peepshows are. This suggests that the targeted users probably were older children who could handle delicate paper without breaking it. Experiencing how time-consuming and difficult it is to assemble a paper peepshow gave us a better appreciation of crudely produced manuscript paper peepshows from the nineteenth century. Equally noteworthy is the work involved in arranging cut-out panels and imageries to make the whole scene appear coherent: while we ordered the elements when the structure of the paper peepshow was collapsed flat, we needed to make sure that the composition would also work when the structure was expanded. Needless to say, it would be unwise to apply reflections of making the paper peepshow in the modern setting directly on to the analysis of its making in the nineteenth century. Nonetheless, what has been revealed through this hands-on workshop will provide valuable inspiration for examining the production of nineteenth-century paper peepshows. 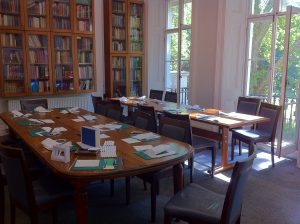 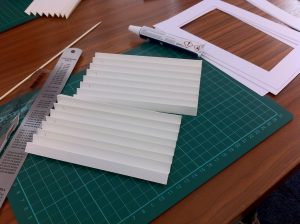 Paper peepshow bellows in the making 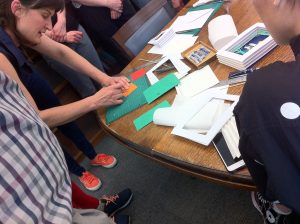 Listen to the podcast of the panel discussion here.

Jonathan Gestetner opened the discussion offering his insight as a collector, introducing the wide range of paper peepshows in the collection he donated to the V&A, which include manuscript paper peepshows (e.g. [The Thames Tunnel], c. 1825, works reflecting exotic novelty such as the arrival of the giraffe in London (Museum of the English Missionary Society in London, c. 1850), as well as souvenirs of Albert Smith’s moving panorama lecture (Mr. Albert Smith’s Ascent of Mont Blanc every evening at the Egyptian Hall Piccadilly, 1853).

Professor Marina Warner (Birkbeck) presented the paper peepshow as fantasy interwoven with memory. As an optical toy, it should not be seen teleologically as a stage in the history of cinema, an early and imperfect attempt to create moving images. Rather, toys ought to be taken seriously as major products of human imagination, and in the paper peepshow, this takes the form of wonder—in both sense of the word: being curious and the fantastic and exotic.

Dr Catherine Yvard (Special Collections Curator, National Art Library, V&A) talked about another aspect of the paper peepshow—its life in the museum. She expanded on Jonathan’s talk and introduced more nineteenth-century and modern or contemporary paper peepshows, including her favourite one, A Peep at the Elephant at the Adelphi Theatre, 1829, and a 1952 example Enid Blyton presents a Rubbalong Tale. Catherine revealed many exciting projects that the V&A is undertaking to shed more light on the paper peepshow, including an online catalogue, a ‘capsule box’ that allows visitors to handle a wide variety of works, and animation project that recreates the viewing experience of the paper peepshow.

Dr John Plunkett (Exeter) concluded the panel by expanding the discussion of the paper peepshow into the wider realm of nineteenth-century optical entertainments. The paper peepshow belongs to the nineteenth-century interest in the domestication of optical toys, while also being related to the new market of commemorative, luxury prints. In addition, John also commented on paper peepshow’s two predecessors, the perspective view and the itinerant peepshow box, and noted the differences in the viewing experiences of the three.

The diverse perspectives on the panel examined the paper peepshow from different angles, giving audiences not familiar with the optical toy an all-rounded image of it. At the same time, key issues on the scholarly analysis of the paper peepshow—such as the fantastic, the interplay between old and new forms of entertainment, the appeal of the unknown—emerged when speakers echoed each other in their talks’ content.  As such, the panel discussion had been successful in achieving its goal as it provided stimulating thoughts future research, as well as inspired interest in the little-known paper peepshow in the audience.