Sasha Dovzhyk, PhD candidate at Birkbeck College, and organiser of The Eve of St Aubrey: Re+Collecting Beardsley (1872–1898), writes about the conference.

The Eve of St Aubrey: Re+Collecting Beardsley (1872–1898) marked 120 years since the death of the English artist Aubrey Beardsley with a symposium. The musical prodigy diagnosed with tuberculosis at seven, the notorious illustrator of Oscar Wilde’s Salome at twenty-one, he became his decade’s namesake at twenty-three, when Max Beerbohm famously confessed: ‘I belong to the Beardsley Period’. He still is the icon of the ‘yellow nineties’ and a symbol of revolution in the art of printing and illustration. His extraordinary oeuvre and mythologized persona have informed avant-garde movements worldwide, inspiring recurrent waves of the Beardsley Craze, one of which we are living today.

The Eve of St Aubrey brought together fifty Beardsleyites to celebrate his legacy. The setting for the congregation was the Grade 1 listed Mary Ward House, an Arts and Crafts architectural marvel at the heart of London’s Bloomsbury. The building opened its doors to the public in the year of Beardsley’s death. The event took place in Mary Ward’s Dickens Library, a stunning room with dark wood paneling and contrasting green tiles, which was one of the first public libraries in the UK.

The event was generously supported by the Lorraine Lim Postgraduate Prize, the Birkbeck Centre for Nineteenth-Century Studies and a donation by Simon Wilson. Liberal donations of Beardsley enthusiasts supported our relocation to Mary Ward House to avoid crossing the industrial action’s picket line at Birkbeck in support of the University College Union industrial action.

The Lorraine Lim Postgraduate Prize was established to commemorate and continue the work of late Dr Lorraine Lim. Until her untimely death in 2017, Dr Lim had been Co-Director of Birkbeck Interdisciplinary Research in Media and Culture (BIRMAC) and had a part in initiating its Graduate Student Competition. The Eve of St Aubrey strengthened the postgraduate network of Beardsleyites by enabling three PhD students present their research alongside acclaimed Beardsley scholars. In addition, we invited the Aberystwyth University PhD student Madeleine Emerald Thiele to chair the first panel of the symposium and funded her trip to London.

The symposium commenced with a conversation with Linda Zatlin, the author of Aubrey Beardsley: A Catalogue Raisonné (Yale UP, 2016) which reproduces all the recorded works of the artist in two lavishly printed volumes. It took Zatlin twenty-five years to research and catalogue more than 1100 designs by the artist who was dead before his twenty-sixth birthday. During the conversation, Zatlin spoke about Beardsley’s technique and ‘particular kind of realism’. She also discussed his previously unpublished early drawings, now available in the Catalogue, and the impact of tuberculosis on his work. At the moment, Zatlin is working on a new edition of Beardsley’s letters, that will contain 119 epistles hitherto unknown to the public. 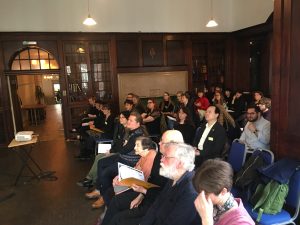 The first panel, titled The ‘Beardsley Period’ and Beyond, took the audience from the Beardsley craze of the 1890s to the 1960s Beardsley revival. Dr Samuel Shaw (University of Birmingham) called for the need to study Beardsley’s British context and to reassess the importance some of his overshadowed contemporaries, including the work of William Strang and Joseph Benwell Clark. Joseph Thorne (Liverpool John Moores University) delighted us with Beardsley’s caricatures of his friends and associates in the context of Decadent gift economy. Dr Kate Hext (University of Exeter) talked about the revival of Beardsley’s queer style in London after the 1966 V&A exhibition and the sexual radicalism of Beardsleyesque innovators in swinging London.

After this first panel, Simon Wilson presented three sumptuous pamphlets he had privately published for this event. The first pamphlet includes ‘Rondel to Aubrey Beardsley: When His God Pan Disappeared from the Wrapper Design of The Studio’, printed for the first time on the occasion of the symposium. This anonymous tribute to Beardsley (c. 1893), discovered by the 1890s specialist Michael Seeney in the auctioned album of The Studio editor Gleeson White, was dedicated to the expurgation of a figure of the god Pan from Beardsley’s cover for the first issue of the journal. Besides the reproductions of both the original and the censored version, the pamphlet includes a scholarly note by Wilson which reflects on the reasons for censorship. The other two pamphlets contributed by Wilson to the symposium’s pack are Arthur Symons’s Aubrey Beardsley: A Memorial Poem (London: The Sign of Nine, 2017), initially printed for Goldsmith’s Symonsposium (21 July 2017); and a beautiful black-and-pink reprint of Wilson’s essay ‘Wilde, Beardsley, Salomé and Censorship’ (published in The Wildean, July 2017; written for the Paris exhibition Oscar Wilde: L’impertinent absolu).

The second panel, The Afterlives of Aubrey Beardsley, explored the diverse receptions of the artist by William Faulkner, Ronald Firbank, and Russian modernists. Dr Emma Sutton (University of St Andrews) offered a nuanced and subtle reading of Beardsley’s and Faulkner’s representations of musicians in the context of race and embodiment. Focusing on the myths surrounding Beardsley’s illness and religiosity in Russia, my paper juxtaposed the images of the artist as repentant sinner and homoerotic symbol. ‘Aubrey Beardsley in a Rolls-Royce’, as the camp British novelist Ronald Firbank was described in the American magazine The Double Dealer, was brought to the symposium by Dickon Edwards (Birkbeck, University of London).

The finale for The Eve of St Aubrey was provided by Matthew Sturgis, the author of Beardsley’s acclaimed biography, who read his brilliant 1890s Duologue Masks and Phases with the actor Andrew Martin. The two performers charmed the audience with Beardsleyisms such as ‘if you gave him a daisy to draw he would show you a fleur-du-mal’. As Matthew Sturgis’s character remarked, supplying a perfect endnote for the day, ‘I would bet you a guinea that in a hundred years time Beardsley is the only artist of our little fin-de-siècle still looked at, admired and puzzled over’.

The poster for The Eve of St Aubrey, which creatively incorporates a stylised portrait of Beardsley and some recognisable details of his drawings, was designed by the artist Hanna Strizh.

In order to open access to the latest Beardsley scholarship, we recorded the presentations given at the symposium and made them available via the website of the Centre for the Nineteenth Century Studies.