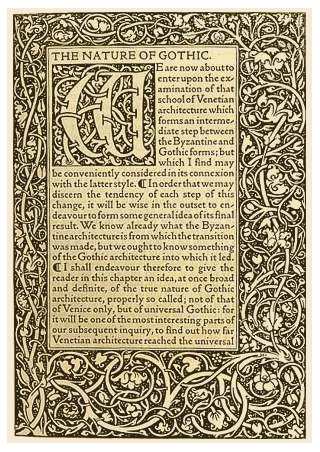 Abstract: John Ruskin’s account of the gothic spirit, from the central chapter of The Stones of Venice, ‘The Nature of Gothic’ (published in 1853), is highly influential and much fêted. Such influence has long been recognized over figures such as William Morris, over the architectural practices of Victorian Britain, and over political economic thought, especially after Ruskin’s 1862 publication of ‘Unto This Last’, which develops the earlier work’s critique of laissez-faire economics. But Ruskin’s innovative theorization of the concept of the gothic in ‘The Nature of Gothic’ has never been connected with gothic literature itself. This is a significant oversight, as this paper demonstrates, one that has left a fundamental shift in Victorian gothic literature unrecognized, and that has allowed the eighteenth-century, consistently negative associations of the gothic to stand unchallenged in the very different world of post-Ruskinian gothic literature. Ruskin’s considerable influence over gothic fiction is reconstructed, in this paper, by analysis of Charles Dickens’s Bleak House (1853), Sheridan Le Fanu’s In a Glass Darkly (1872) and Robert Louis Stevenson’s Dr Jekyll & Mr. Hyde (1886).

Listen to a recording of Richard’s talk here: