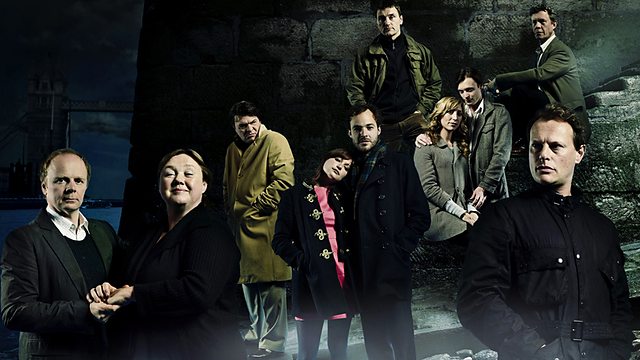 Last week we were incredibly fortunate to welcome Sandy Welch, Jeremy Mortimer, and Mike Walker to the Birkbeck Forum for Nineteenth-Century Studies, to discuss their respective adaptations of Our Mutual Friend.

Sandy opened the event by talking a little about the process of beginning to write the screenplay for her TV version, which was screened in 1998 on the BBC. She explained that she was in fact originally writing an adaption of a different novel, until it became evident that there were two other versions of that text being worked on by other writers. At this point she was then offered the chance to choose the novel she wished to adapt, a privileged position which she suspected a writer wouldn’t be put in in today’s commissioning climate.

Sandy then talked a little about choosing which elements of the novel to keep, and which to cut. She explained that keeping too many of the story’s ‘Society’ elements would have made the adaptation too confusing, and so she instead used Society as a kind of Greek chorus to the main action. She showed a clip from very near the beginning of the adaptation, when Eugene Wrayburn and Mortimer Lightwood make the long journey from the Lammles’ wedding down to Limehouse, a sequence which she explained that she had deliberately made as long as possible, so as to emphasise the change in landscape.

The number of characters within the novel was also a key issue in writing the adaptation. Although the episodes were 90 minutes long, it wasn’t possible to fit Bradley Headstone in until the second episode: Sandy pointed out that if we imagine Bradley as the main ‘villain’ of the story, this is a relatively late entry. Nevertheless, it was agreed by all that David Morrissey’s performance as Bradley was certainly striking enough to make up for this! Sandy also emphasised the importance of having 90-minute episodes: she explained that she felt this length of time was necessary to establish the tone of the novel, and to let it play out properly on screen.

Sandy also talked a little about the fantastic river set, constructed in Cardiff bay, and the dust heaps, which were located in a quarry in Wales. The effort that went into these sets meant that many more scenes were set outside or at the river, so as to make the most of the locations.

Jeremy and Mike then discussed the process of adapting the novel for the radio. This adaptation of Our Mutual Friend, scripted by Mike and produced by Jeremy, was broadcast in 2009 on BBC R4 in 2- x 15-minute slots, a very different format to the 90-minute episodes of the TV version. This adaptation opens with Dickens as a narrator, having just finished a public reading of ‘A Christmas Carol’, and heading out into the city – a useful narrative technique for radio.

There was then some discussion about both the advantages and potential drawbacks of adapting the novel into such short instalments. Mike suggested that it was helpful in order to incorporate all of the different threads of the story, but then could present problems if the audience did not listen to every single instalment. The episodes were also broadcast at multiple times of day and in different formats (as a weekend omnibus, for example), so it wasn’t possible to cater for one specific type of listener.

Jeremy and Mike also discussed the process of characterisation, suggesting that radio is perhaps a more effective medium than television for thinking about the modernity of Dickens’s characters, as listeners are not specifically concentrating on the ‘Victorianness’ of the costumes and setting. Jeremy commented that radio and drama are particularly effective means for considering how these themes might affect us in the present day, as by its very nature drama unfolds in the ‘now’.

Following these two wonderful and thought-provoking presentations, there was some lively discussion and a few questions from the audience. One member asked whether it was difficult to adapt a text that you are particularly fond of, but Sandy suggested that this actually liberated you as both a reader and writer, by allowing you to put in all your favourite bits, and share your own reading of events.

Another question focused on whether it might be difficult to have responsibility for shaping an audience’s perception of the characters. All three speakers suggested that this was perhaps also an issue in the novel’s original publication, due to Marcus Stone’s accompanying illustrations. The different approaches and the number of different adaptations mean that various readings of each character are available. In the TV adaptation, for example, it was suggested that David Morrissey’s performance plays up the repellent nature of Bradley’s personality, but not his physical appearance (unlike an earlier character such as Quilp in The Old Curiosity Shop, who is presented as both physically and morally repugnant).

A third question related to the pressures of audience numbers and audience responses: Sandy commented that in 1998, there was not such a pressure on recording audience figures as there is in today’s competitive climate. In the case of Radio 4, listener figures generally remain fairly consistent across the board, so this wasn’t an issue here either. The TV adaptation was also before the Twitter age, so if it were screened now would probably receive more of an online reaction (as was the case with Sandy’s more recent adaptation of Jane Eyre).

The final question of the event focused on our speakers’ wish-list for future adaptations. Sandy would love to adapt A Tale of Two Cities, whilst Jeremy and Mike are hoping for Little Dorrit. Watch this space!

sitemanagerThursday 4 June, Panel on Adapting ‘Our Mutual Friend’ for TV and Radio06.01.2015